Home » How to Root Samsung Galaxy A40 without PC

Today, we’ll Root Samsung Galaxy A40 without PC. In today’s Android market, there is a demand for smartphones with high-end specs and affordable price tag. This is the reason why Chinese companies like Vivo, Oppo, or Huawei are growing immensely in the market as compared to Samsung, Sony, or Motorola. These companies provide flagship phones at a very reasonable price.

To overcome with this, Samsung has launched a redefined Galaxy A lineup in 2019. This year, Samsung has been focusing on the budget-friendly devices instead of the flagship phones. Just in few months, they have launched Samsung Galaxy A10, Galaxy A20, Galaxy A30, and Galaxy A50. These devices are released especially to target offline buyers.

Out of all, the Galaxy A40 is the most compact device with some decent specs and features. Although it is budget-friendly, still it looks and feels like a premium device. Samsung Galaxy A40 launch date in India in March, 2019. But users had already leaked Galaxy A40 review and unboxing videos on YouTube. Galaxy A40 sports 5.9 inches of Infinity-U screen with 1080 x 2340 pixels of resolution.

Do you want to install custom ROM on Galaxy A40? If yes, then you must root Android phones first. Once rooted, you can easily flash custom ROM, or install TWRP recovery. Additionally, you can even wipe data, cache, create Nandroid backup, increase internal memory and do much more. Are you ready to Root Android phone without Kingroot, Kingoroot, Flashify, Root master etc. apps? Then head on to our tutorial to officially root Samsung Galaxy A40 without PC. 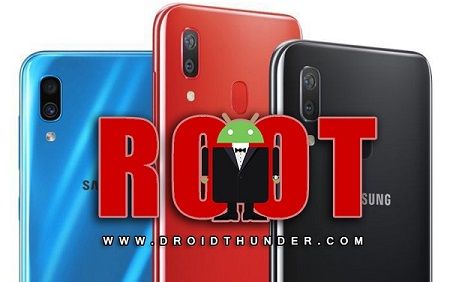 How to Root Samsung Galaxy A40

In this article, we’ll use Magisk and SuperSU methods to gain root access on your Galaxy A40 device.

Rooting will void your phone warranty. Proceed at your own risk. We at Droid Thunder will not be held responsible for any damage.

At first, we’ll root Galaxy A40 using the Magisk file.

In this method, we’ll use the SuperSU file to root Galaxy A40.

Finally! This is how you can root Samsung Galaxy A40 without PC. Now you are free to flash custom ROM on Galaxy A40, install the kernel, mods like Xposed framework, etc. Kindly share your views and opinions using the comments section given below.