In this guide, we’ll root Samsung Galaxy A50 without PC. Samsung tries to maintain its position in the Indian market by launching the Samsung Galaxy A50. It is released at such a price tag which is majorly dominated by Xiaomi Poco F1, Honor P30 Pro, OnePlus 7 Pro, and Nokia 7.1. The all-new Galaxy A50 features everything you’d expect from a mid-range smartphone.

Galaxy A50 price in India is Rs. 18,490 especially for the 4GB RAM and 64GB storage variant. Whereas, on the other hand, the Galaxy A50 128 GB variant is priced at Rs. 21,490. In this tutorial, we’ll root Samsung Galaxy A50 without using a PC. Yes, now it is possible to get root access on Samsung Galaxy A50 mobile. Once rooted, you can easily install custom ROM on Galaxy A50. 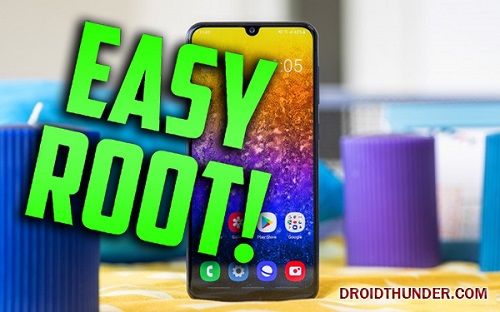 Moreover, you can also flash TWRP recovery on Galaxy A50. After root you can even wipe data, cache, overclock and underclock, create Nandroid backup, increase internal memory, and much more. There are many Android apps on Google Play Store to root Android smartphones and tablets. Some of which are Kingroot, Kingoroot, Flashify, Root master etc. However, if you get root error in Kingroot app, then use the method given below.

Samsung Galaxy A50 launch date in India in February, 2019. But users had already leaked Galaxy A50 review and unboxing videos on YouTube. Talking about the Samsung Galaxy A50 specification, it offers 6.4 inches of Super AMOLED screen with Infinity-U display. Besides, it sports 2.3GHz Octa-core Exynos 9610 processor with 4/6 GB RAM and 64/128 GB storage. Moreover, it comes with a non-removable Li-Po 4000 mAh battery with fast charging support. Furthermore, it supports a triple camera setup of 25 + 8 + 5 MP on the rear. Whereas, on the front, it sports a 25-megapixel selfie camera.

How to Root Samsung Galaxy A50

In this article, we’ll root Galaxy A50 using two methods. At first, we’ll use Magisk while in the second method, we’ll use the SuperSU package file. Let’s get straight into it.

Rooting Galaxy A50 will void its warranty. If your devices get damaged during this process, then we’ll not be held liable for that. Please proceed ahead at your own risk.

At first, we’ll root using Magisk file. It is used to modify the system without actually modifying it.

Steps to Root Samsung Galaxy A50

In this method, we’ll use TWRP recovery and flash SuperSU.zip file to gain root access.

Steps to Root Samsung Galaxy A50:

Finally! You have successfully rooted Samsung Galaxy A50 using SuperSU. Go ahead and flash custom ROM on Galaxy A50, install the kernel, mods like Xposed framework, etc. Do let me how this is working for you. And as always, if you have any suggestions or issues related to this article, then kindly comment below.

1 thought on “How to Root Samsung Galaxy A50 without PC”