Nowadays, Samsung is focusing mostly on mid range smartphones rather than the flagship ones. They have launched the Galaxy A series as well as Galaxy M series which did get positive response from the Android users. The all new Galaxy A70 is Samsung’s latest device from the A series. This phones is released with a premium design and affordable price tag as well. Moreover, Galaxy A70 features all the trendy attributes including an in-display fingerprint sensor, Samsung Pay, triple rear cameras and much more. In this guide, we’ll go through easy steps on how to install TWRP Recovery on Galaxy A70.
[wp_ad_camp_1] 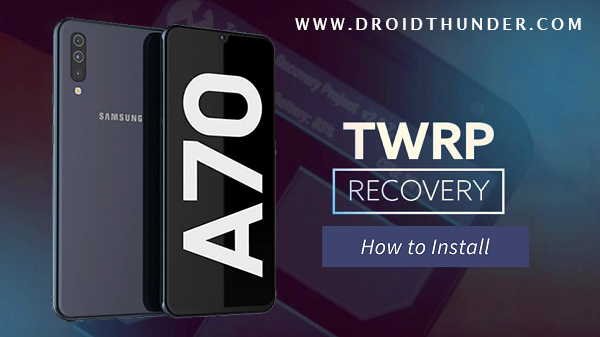 Samsung Galaxy A70 price in India starts at Rs. 28,990 onward. It comes in two variants: Galaxy A70 128GB 6GB RAM and Galaxy A70 8GB RAM 128GB. To be honest, both the variants have similar specs except the RAM and storage. Galaxy A70 launch date in India was May 2019. However, it was already making news with its amazing specs and features. Looking at some more Galaxy A70 specification, it offers Qualcomm SDM675 Snapdragon 675 Octa-core processor. Furthermore, it features 6.7 inches of Super AMOLED screen with 1080 x 2400 pixels of resolution.

Talking about the Galaxy A70 camera, it sports a triple camera setup of 32 + 8 + 5 megapixel on the rear. Whereas on the other hand, it features a 32 megapixel of selfie camera. Looking at the battery backup, it offers a non-removable Li-Po 4500 mAh battery with fast charging support. On the contrary, you can get more Samsung Galaxy A70 review and unboxing videos on YouTube. Besides, it comes with latest Android 9.0 Pie operating system. Most important, there are guaranteed chances of Galaxy A70 Android Q update in the coming days.

The steps given ahead are risky. We at Droid Thunder will not be held liable for any damage caused to your phone by referring this guide.

Steps to install TWRP Recovery on Galaxy A70:

Then you’ll see these files in the ADB folder: 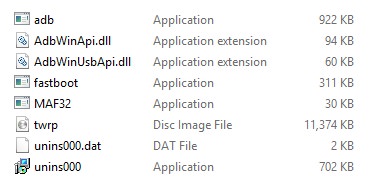 Step 6: On your PC, go to C:\Program Files\Minimal ADB and Fastboot folder, hold Shift button and right mouse click on an empty space. You’ll see a list of options from which select Open command window here option. This will open the cmd window. 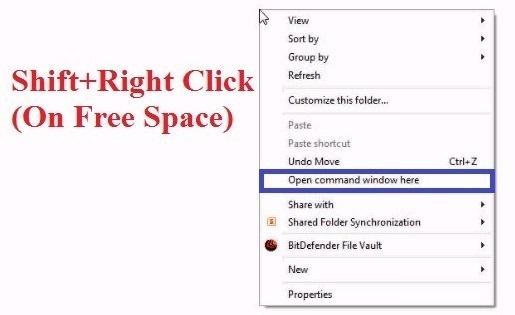 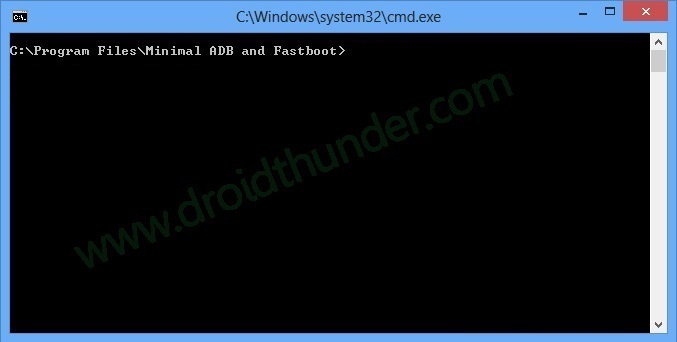 Step 7: Type the below command in the cmd window and press enter key:

As soon as you hit enter, a message saying ‘List of devices attached’ will appear. This will confirm that your phone is successfully connected to PC. 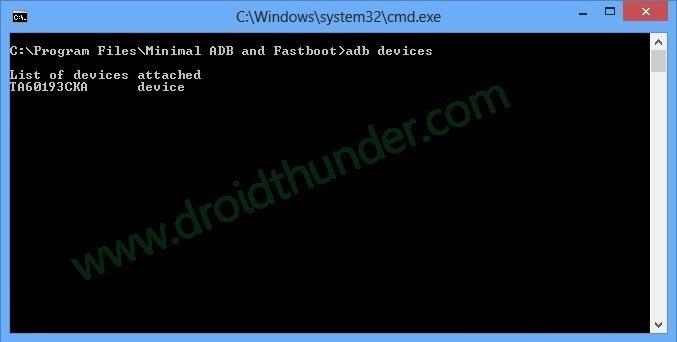 Step 8: Now type the below command to boot Galaxy A70 into fastboot mode. 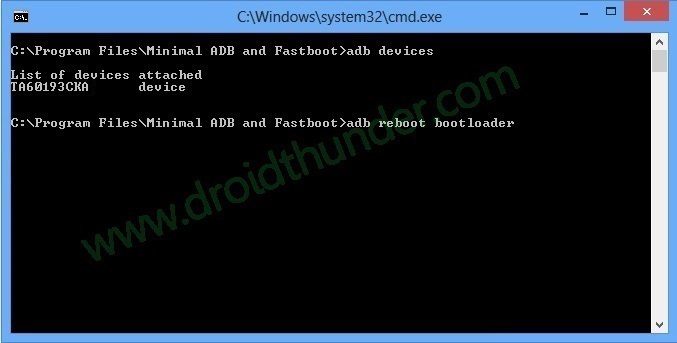 Step 9: To confirm whether fastboot is functional or not, type the below command and press enter: 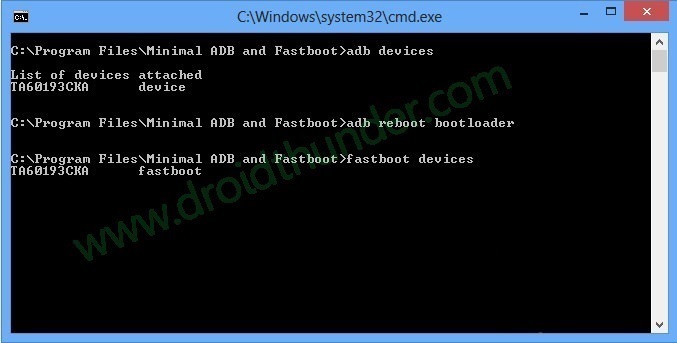 Note: Some random numbers along with ‘List of devices attached’ message will confirm that fastboot is indeed functional.

Step 10: Let’s install TWRP recovery on Galaxy A70 now. For that, type the below command and press enter: 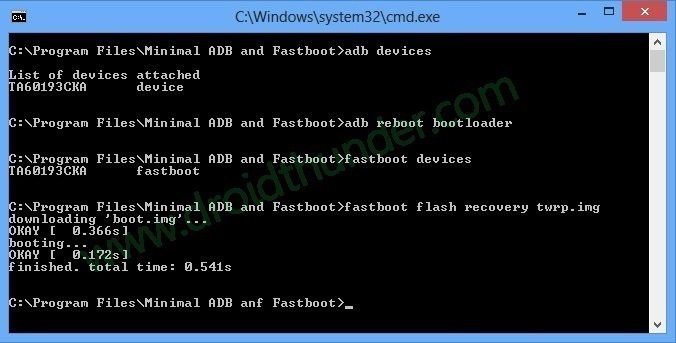 This will begin Galaxy A70 TWRP recovery installation process. It will hardly complete within few minutes.

Finally! This is how you can install TWRP recovery on Galaxy A70 smartphone using ADB and fastboot commands.

Step 4: Now restart it into download mode. For doing so, press and hold Power button+ Volume down key simultaneously until the download mode appears.

Step 6: On your PC, launch the downloaded Odin tool. 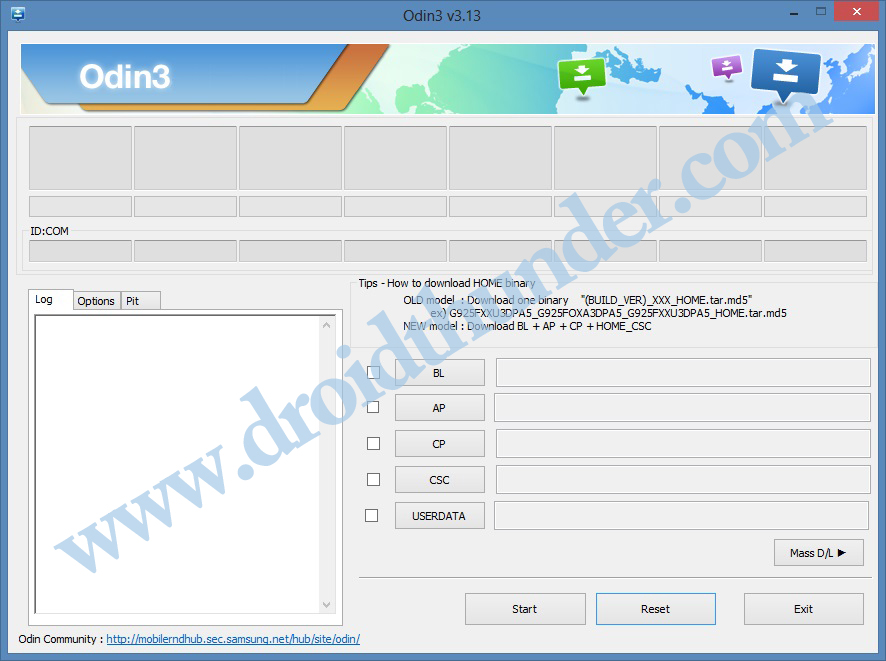 In Odin, the ID: COM section will turn blue. Also an Added message will appear. This will confirm a successful connection between your phone and PC. 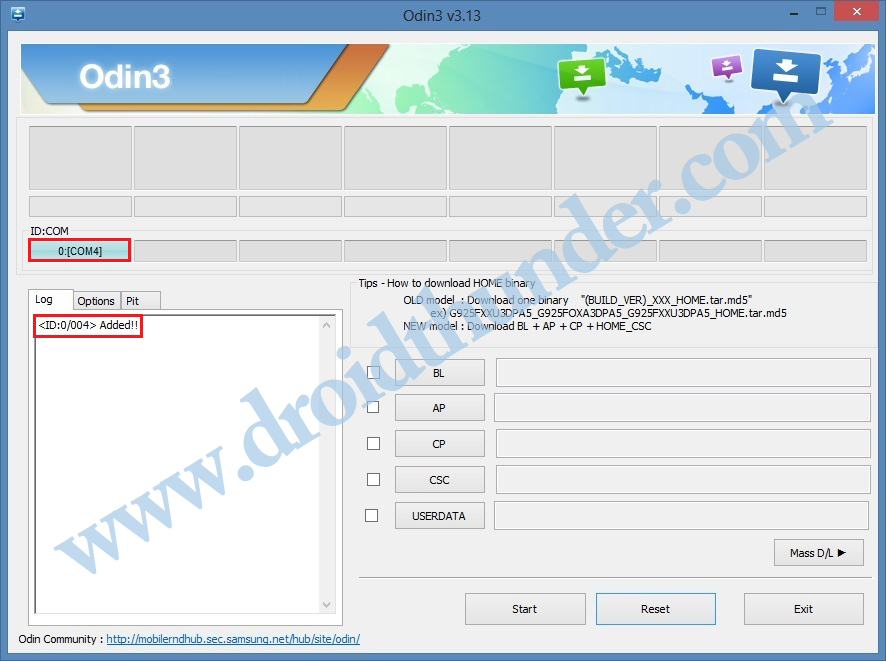 Note: If such thing doesn’t happen, then change USB cable or the USB port.

Step 7: Besides, check the Auto Reboot and F.Reset Time options as shown below. 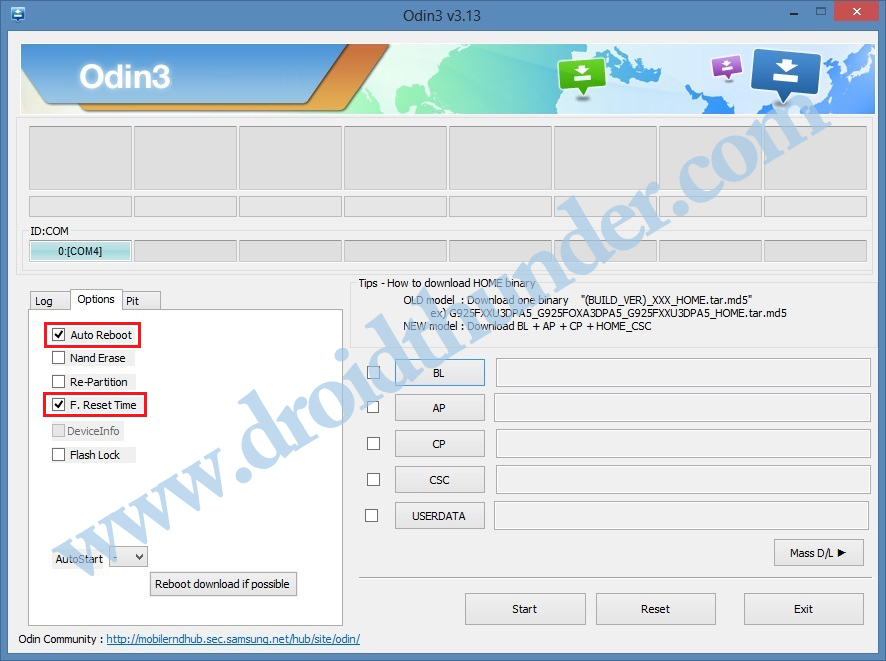 Note: Do not check Re-partition or Nand Erase options.

Step 8: Click on the AP button and select the downloaded TWRP recovery.tar.md5 file. 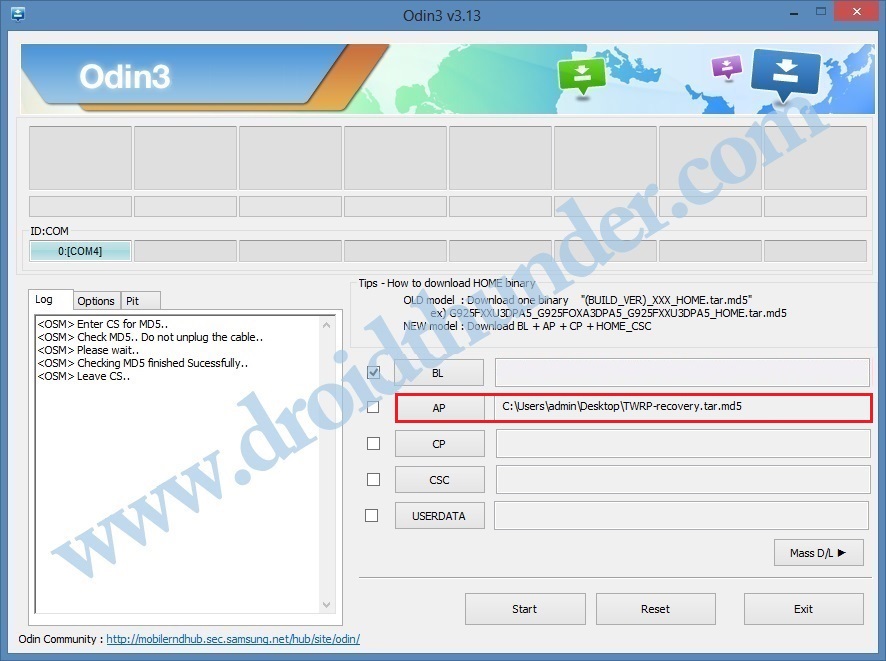 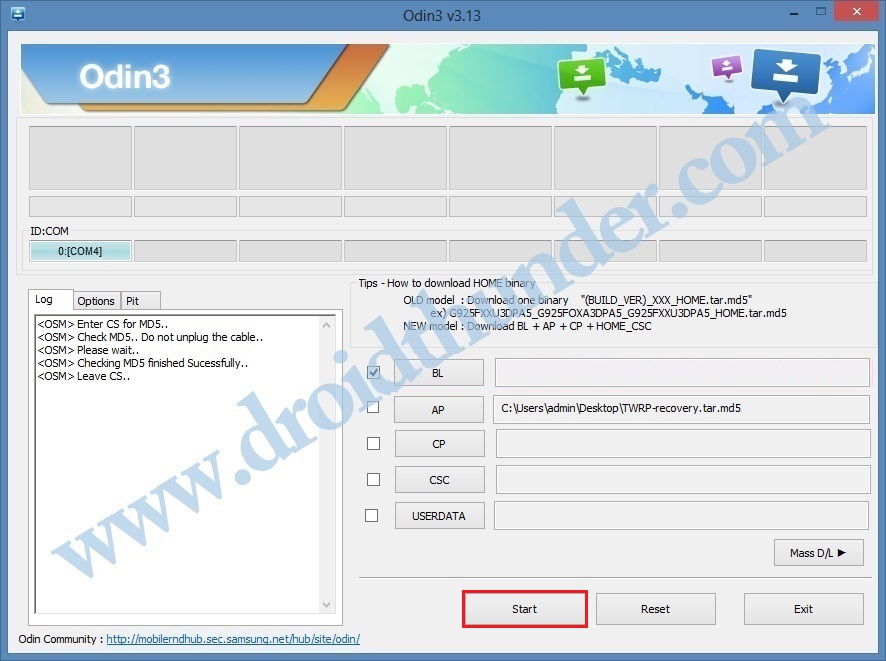 Be patient and wait until the installation completes. As soon as it finishes, the ID: COM section will turn green with a Pass message. 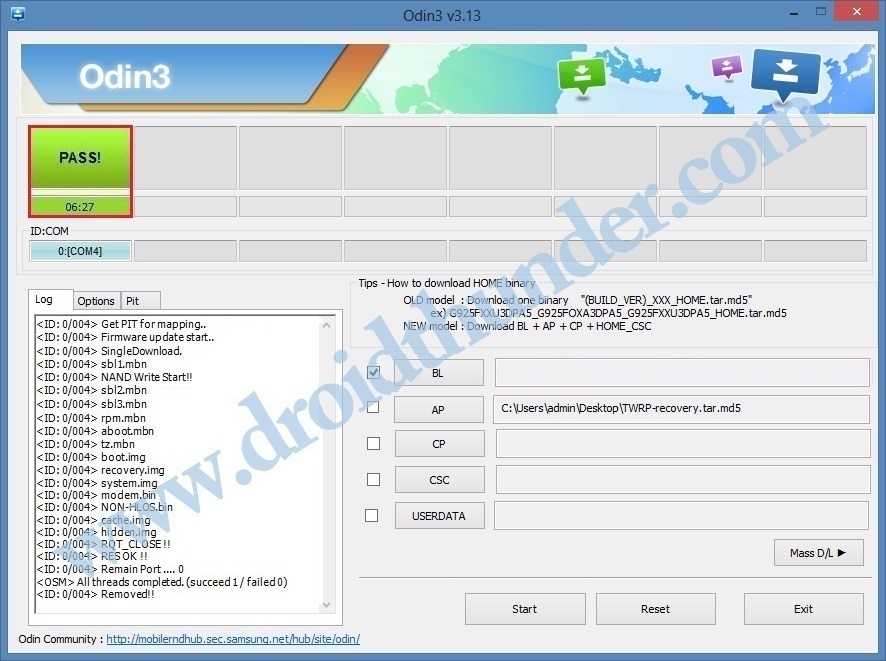 Note: If Odin fails, then close everything, again boot your phone into download mode and repeat the complete process again.

Steps to Boot Galaxy A70 into TWRP recovery mode:

Step 1: Switch off your Galaxy A70 completely until it vibrates.

Step 2: Press and hold Volume up key + Power button simultaneously. As soon as you see the TWRP logo, leave both the keys.

Note: If you are not able to reboot phone into recovery, use TWRP manager app from Google Play Store.

I hope this article helps you to download and install TWRP recovery on Samsung Galaxy A70 SM-A705FD smartphone. For any suggestions or issues related to this guide, use the comments section mentioned below.

Till then Spread Love and Keep Smiling.
Peace Out! ✌