Samsung Galaxy M31 Android 10 update is finally available. In 2019, Samsung took a big step in restructuring its smartphones, especially for the mid-range Android markets. In doing so, they even launched the Galaxy M series to take over the price-sensitive rivals like Xiaomi, Oppo, and Vivo. The M series includes Galaxy M10, M20, and M30. Furthermore, the company started upgrading each smartphone with new features. They were named as Galaxy 10s, 20s, 30s, and so on.

After approximately five months, Samsung brings a successor to Galaxy M30s named as Samsung Galaxy M31. This handset comes with a minor upgrade, most importantly camera-wise. According to Sammobile, Samsung Galaxy M31 gets a software update with firmware M315FXXU1ATD1. You can download this update via OTA (over-the-air) from your phone Menu→Settings→Software Update menu.

Or else you can manually flash this Android 10 One UI 2.0 update using our guide given below. All you need to do is download the latest firmware from our downloads section and install it using Odin flash tool and a PC. Currently, the update is only available in India. However, it’ll make its way to other markets in the coming weeks. This One UI update comes with the latest April 2020 security patch with major enhancements.

Look-wise, it is difficult to distinguish between the Samsung Galaxy M30s and Galaxy M31. Both the handsets come with an Infinity U display of 6.4 inches. Moreover, M31 has a plastic body with slightly curved sides. Hence, it feels comfortable to hold in the hand. The most noticeable change is the quad-camera setup at the back. On the other hand, it sports a single 32 megapixels of selfie shooter on the front.

To be specific, the quad-camera includes a 64MP of a primary wide camera, 8MP ultra-wide, 5MP macro, and 5MP depth sensor. Talking about the Galaxy M31 processor, it features Exynos 9611 same as its predecessor. Additionally, it comes in two variants: 64GB 6GB RAM and 128GB 6GB RAM. Looking at the battery specs, it sports a massive 6,000mAh battery along with 15W of fast charging.

The Android 10 version was launched back on September 3, 2019. At first, it was released for Google Pixel phones. But soon, it became available for the rest of the brands. So the main question is that, will my Samsung Galaxy phone get an Android 10 update? The answer is quite simple. Your device is most likely to get Android 10 if it came with Android 8.0 Oreo out of the box.

We can say so because Samsung is known to provide two major Android OS updates to most of its phones. This means that any Samsung device that was released with Android 7.0 Nougat or earlier will not be able to get the Android 10 update. However, such users can always rely on those third-party custom ROMs. This way you can enjoy new Android features on your device.

Since December, Samsung started releasing a stable Android 10 update for the Galaxy M20 and the Galaxy M30 Indian variant. It was quite shocking, as there was no chance of these mid-range smartphones to get the latest Android Q update. Soon after that, Samsung is continuously launching a stable One UI 2.0 update for various smartphones.

Samsung considers One UI 2.0 as its best Android version yet. It offers a smooth, fast, interactive, and feature-packed experience. At first, the One UI was launched in 2018 alongside Android 9 Pie. But with the newly launched Android 10 Q, the company has updated it to version 2.0. With One UI 2.0, users can experience completely new and enhanced features.

One UI Core 2 is packed with a new user interface and functionality. Here, you can experience a clean and easy to use interface with minimized pop-ups, new navigation gestures, more toggles on the screen, high contrast keyboard, built-in screens recorder. Besides, it also comes with a Dark theme, Focus Mode, and much more.

You can use this method to unbrick your Galaxy phone. Besides, you can even unroot Android phone or get back to default settings. Interested users may proceed to our easy step-by-step tutorial on how to update Samsung Galaxy M31 Android 10 SM-M315F One UI 2.0 M315FXXU1ATD1 firmware. 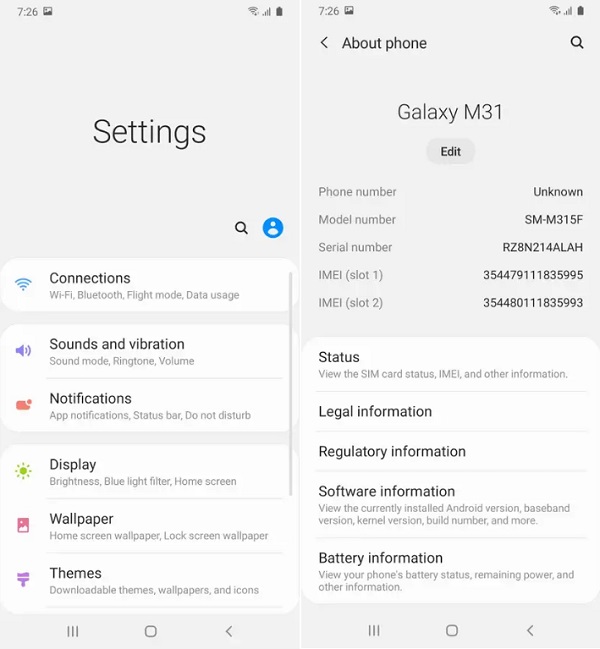 Perform the steps given below carefully. We at Droid Thunder will not be liable for any damage whatsoever. Attempt everything at your risk.

This Android 10 M315FXXU1ATD1 is only for Samsung Galaxy M31 with model number SM-M315F. Do NOT flash this official Stock ROM on any other device or variant. It might cause permanent damage or brick your phone.

After doing everything as mentioned above, let’s start the Samsung Galaxy M31 Android 10 flashing process.