After a much longer time, Samsung has finally started rolling out Android 9.0 Pie updates for Samsung Galaxy S9 and Galaxy S9+ smartphones. Along with India, the update is out in various regions, and it won’t take a long time before the rollout completes for most countries. Those users who have not received this January update need to wait till the last week of February. It is expected that both the carrier-locked and unlocked devices will see the update till next month.

You can experience many new Android Pie features with this update. Moreover, the newly designed user interface allows you to make one-handed usage easier. On the lock screen, a lockdown mode is added to temporarily block fingerprint and face authentication. Also, a dark mode is added to stabilize the battery life. Android 9 gives a feature to pair up to five Bluetooth devices and switch between them seamlessly. There is also an Android Studio Tool included for monitoring performance.

How to Install Samsung Galaxy S9 Plus Android 9 Update G965FXXU2CRLO

To manually check whether Android Pie is available for your device or not, go to settings and click on Software update. Then select the Download updates manually. And if you have not yet received the update, just go through this guide and manually flash it with easy steps. Note that this is not a third party custom ROM but an official Stock firmware rolled out by Samsung. Without further ado, let’s proceed to our guide on how to update Samsung Galaxy S9 Plus to Android 9.0 Pie official firmware.

Proceed at your own risk. We at Droid Thunder will not be held responsible for any damage caused to your S9 Plus by following this article.

This Android 9.0 Pie firmware is only for Samsung Galaxy S9 Plus with model number SM-G965F. Do not install this update on any other device or variant. It will brick your device or cause permanent damage. 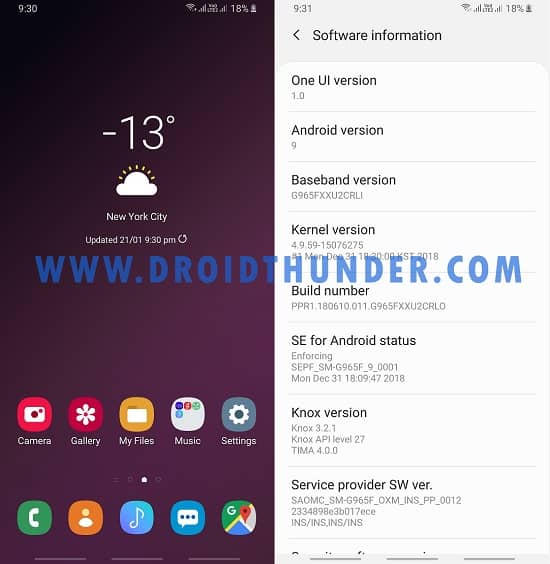 Now that you’ve downloaded the latest update, it is time to install it on your device. Follow our guide given below to flash the Android 9 update.

Finally! You’ve successfully updated Samsung Galaxy S9 Plus SM-G965F to the latest official Android 9.0 Pie G965FXXU2CRLO firmware. To confirm the same, go to Menu > Settings > About Phone. If you’ve any questions regarding this article, then do comment below.