This is an Indian (INS) OTA update which was released on 30th May 2018. If you’ve not received this update through OTA (over the air) then go ahead and manually install it to enjoy all the Android Oreo features.

After the tremendous success of Galaxy J3 last year, Samsung immediately decided to launch the fourth edition to its famous J series. Launched in May 2018, Samsung Galaxy J4 features 5.5 inches of Super AMOLED screen with 720 x 1280 pixels of resolution.

It is powered by 1.4 GHz of Quad-core Cortex-A53 Exynos 7570 processor with 16 GB of internal storage and 2 GB of RAM. It also comes with Android 8.0 Oreo out of the box and sports 13 megapixels of primary camera and 5 megapixels of front shooter for selfies.

To always remain charged it features a removable Li-Ion 3000 mAh battery. Besides, it is definitely considered as a sequel and upgraded version of the last year’s Galaxy J3. 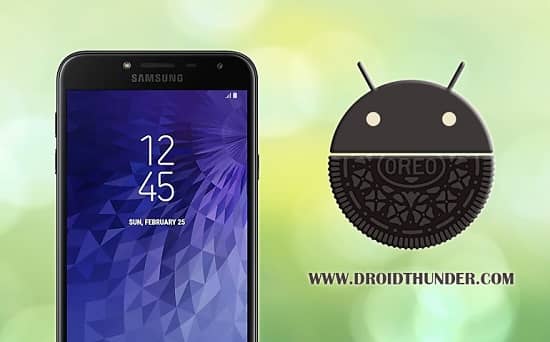 Here, we’ll discuss a detailed procedure on how to install the latest Android 8.0.0 Oreo J400FXXU1AREC Official Firmware on Samsung J4 SM-J400F smartphone. This is an official update (Stock ROM) rolled out by Samsung and not any third party custom ROM. Also with this OTA update, you can regain your device warranty back. This process will work on both rooted as well as un-rooted phones. Let’s have a look at the firmware info given below.

The steps mentioned below are risky so implement them without a single mistake. If your phone gets damaged by following this guide then we at Droid Thunder will not be held liable for that.

This Android 8.0.0 XXU1AREC Oreo firmware is compatible only on Samsung Galaxy J4 with model number SM-J400F. Flashing this update on any other device or variant might cause unwanted outcomes or bricked phones.

Finally! This is how you can install the latest official Android 8.0.0 XXU1AREC Oreo Firmware on your Samsung Galaxy J4 SM-J400F smartphone. To confirm the same, go to Menu > Settings > About Phone. Share your views and experiences after using it.