Download and Install the latest Android 7.0 Nougat XXU2BQK2 official firmware on Samsung Galaxy A7 SM-A720F (2017) smartphone. In this guide, we’ll discuss how to manually update the Galaxy A7 2017 to the Android Nougat firmware.

Few months before, Samsung released the Android N OS for Galaxy A5 users and now they have started rolling out the same for Galaxy A7. The company claims that it is the most stable firmware with few tweaks and enhancements over the previous build.

It comes with few improved notifications and Quick Settings, multi-window, Dual Messenger, Samsung Pass, and improvements to AOD and app installation. This latest stock ROM can be easily flashed using the Odin tool. 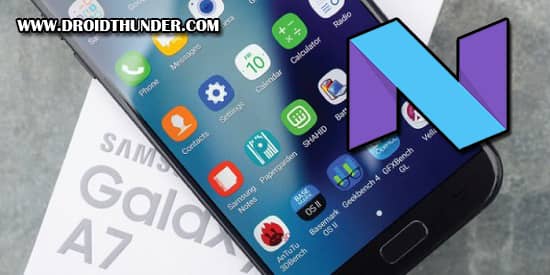 If you’ve soft bricked or lost IMEI of your phone then installing this update can surely get back all the phone settings as they were when you bought it. Also if you want to unroot and regain the warranty back, then flashing this latest firmware is the best solution.

So without wasting any more time, let’s proceed to the step-by-step tutorial on how to manually update the Samsung Galaxy A7 SM-A720F to Official Android 7.0 Nougat XXU2BQK2 firmware given below.

Proceed at your own risk. We at Droid Thunder will not be held liable for any damage. Hence, implement the steps correctly.

This Official Android 7.0 XXU2BQK2 firmware update is only for Samsung Galaxy A7 (2017) with the model number SM-A720F. Flashing this stock ROM on any other device or variant may cause unwanted outcomes or bricked devices.

Now that you’ve downloaded the latest update, it is time to install it on your device. Follow our guide given below to flash the Android 7.0 update.

That’s all! You have successfully installed the latest Android 7.0 Nougat XXU2BQK2 firmware on Samsung Galaxy A7 SM-A720F smartphone. To confirm the same go to Menu > Settings > About Phone. Enjoy and experience the newly added Android Nougat features on your Galaxy A7. Don’t forget to share your views after using it.

If you face any problem while going through this process then don’t hesitate to contact me. Use the comments section given below and I’ll help you guys as soon as possible.